In my January 10, 2020, Seeking Alpha article entitled “TSMC: My Top Pick For 2020 As It Transforms The Semiconductor Market,” I noted in my bullets:

TSMC is the largest spender among the semiconductor foundries, representing 73.4% of all capex in 2019, which enables the company to purchase state-of-the-art manufacturing equipment.

TSMC is the technology leader at the 7nm node and the leader in utilizing EUV lithography for chip-making.

The dynamics of the foundry market has changed since then because of 1) COVID-19 and 2) U.S. Government sanctions against Huawei and its ramifications on Taiwan Semiconductor (NYSE:TSM) and China’s foundry SMIC (OTCQX:SMICY).

This article discusses the current state of the foundry business, focusing on TSMC and the impact of the new foundry positioning, as well as the impact of Samsung Electronics’ (OTC:SSNLF) efforts to increase its market share by introducing <7nm technology and increasing its customer base.

It is important to recognize that Samsung’s capex is largely influenced by memory spend, and the 123.2% increase in capex spend (Table 1) in 2017 is responsible for the memory problems the company is now facing. I discussed this in an August 24, 2020, Seeking Alpha article entitled “Micron Technology’s Troubles: It’s The Company Not The Economy.”

These capex investments have propelled TSMC to dominate the global foundry business with a 57% market share 2020. Samsung is a distant second with a 15% share. By way of reference, in 2015, TSMC held a 52% share, while Samsung’s share was just 6%.

TSMC has a total capacity of 1 million 300mm wafers per month compared to less than 400,000 for Samsung, as shown in Chart 1. 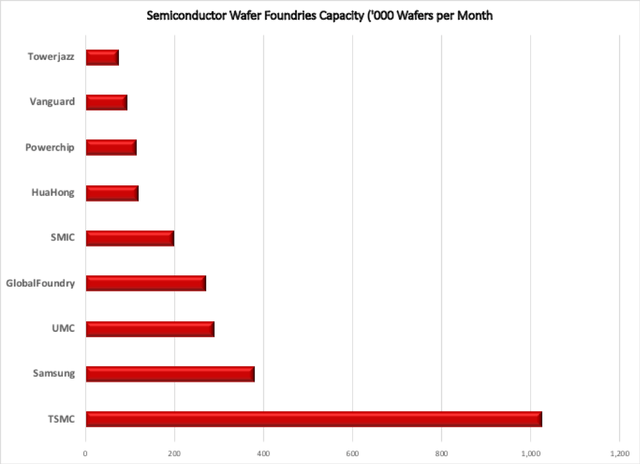 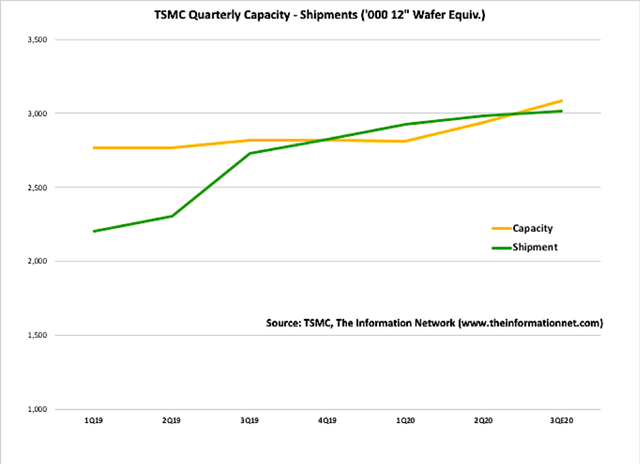 A key factor in moving to smaller dimensions, and hence gaining customers and market shares, is EUV lithography implementation. I’ve written numerous articles on this technology coming from ASML (ASML), and subscribers can read my Marketplace article of June 15, 2020, entitled “ASML: Not Just A Monopoly In EUV Lithography” for more insight.

According to our report entitled “Sub-100nm Lithography, Market Analysis and Strategic Issues,” both TSMC and Samsung were earlier purchasers of EUV lithography systems, each making one purchase in 2015 and 2016.

TSMC and Samsung Electronics are in a race to make the most chips with the smallest dimensions for fabless (and even some companies with a fab such as Intel (INTC)). Currently, TSMC is ahead with a dominant market share and Samsung’s later start in initiating a foundry service. TSMC has also led in capex spend to expand its foundry business. That is changing as Samsung plans to increase its capacity and technical capabilities at the <7nm node.

From an investor standpoint, TSMC is the only play in my opinion and stays my number one investment in the semiconductor sector. SMIC has the ability to make chips close to the 7nm node for Chinese (another) customers such as China’s Huawei, which I discussed in a July 17, 2020, Seeking Alpha article entitled “China: Who Needs TSMC When They Have SMIC.” SMIC is still a favorite stock of mine and is oversold. The sanctions against SMIC are only under consideration, and now may be a buying opportunity.

What provides the better edge for electronics in Formula 1?

Contraceptives Market to Grow at Robust CAGR by 2027