TOKYO — Sony is a company synonymous with electronics. Now, it is overhauling the very business on which it was founded.

The company’s growth has been led by electronics through a variety of innovative products including the Walkman brand of personal stereo music players that took the world by storm beginning in the late 1970s. Recently, however, the division’s presence in the wider corporate group has diminished due to the sharp ascent of others such as video games.

Currently, Sony’s principal electronic products include TVs, digital cameras, audio equipment and smartphones. Most of them have been developed based on proprietary technologies and creative ideas.

But the segment is forecast to incur a 30% decline in operating profit to 60 billion yen ($564.65 million) in fiscal 2020 from the previous year, or less than 10% of total operating profit. That marks a sharp contrast to the 60% generated about 20 years ago.

The COVID-19 pandemic has weighed on Sony’s group earnings, but it is maintaining its overall performance thanks to video games and other recurring-fee businesses. Its smartphone business is expected to climb into the black in the current fiscal year ending March 31, 2021.

“We have been disproportionately spending our development resources on electronics technology,” a Sony executive said, indicating that the business could soon be relegated to the role of supporting movies, music and other operations.

Still, the business is not devoid of hit products.

“Wow, this is in focus!” Hikakin, a Japanese YouTube celebrity exclaimed in June as he brought his digital camera close to a cat in a video posted on the video-sharing website. The camera is the Vlogcam ZV-1 that Sony had just released.

“Vlog” is a coined word to represent a form of blog for which the media is video. While conventional digital cameras are designed to focus on human faces, Sony’s new camera can also focus on objects and pets.

In the April-June quarter, seven major digital camera makers in Japan fell into the red due to widespread use of smartphones and voluntary restraints on outings amid the pandemic, according to SMBC Nikko Securities. But the Vlogcam ZV-1 received twice as many advance orders in Japan as expected, a Sony official said.

But a single hit product is hardly enough to lead Sony’s overall growth. The reality is that the electronics segment at present lacks a product with the kind of huge impact the Walkman had.

Sony, in a bid to ride out the pandemic, has changed the keyword for its research and development program from “Two Rs” to “Three Rs.”

At an online briefing on the management policy in May, Sony President and CEO Kenichiro Yoshida said, “We want to make live events, suspended due to the coronavirus, available on a remote basis.”

The word “remote” has thus been added to Sony’s R&D themes symbolized by the words “reality” and “real time.” The addition means that Sony’s electronics business is about to undergo a significant change. 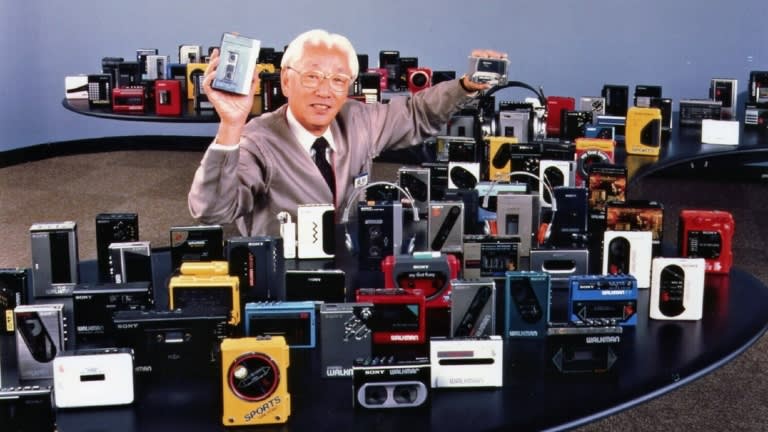 “We used to be an archive company,” a Sony executive said, noting that its business was geared to developing portable devices such as tape recorders and the Walkmans to store music.

But now amid the pandemic, consumers face different needs. Trends toward connecting homes to offices and other remote places on a real-time basis and reproducing content as close to reality as possible are gathering steam around the world.

Sony is taking steps to keep up with that acceleration. In early August, it used dozens of video cameras in a studio to livestream a concert by Ikimonogakari, a popular Japanese pop rock band. The number of cameras deployed was incomparably larger than for a conventional concert.

Images taken were converted into three-dimensional data and connected to each other to stream a 360-degree show enabling viewers to see it from any angle. By even offering views from places where the installation of cameras is physically impossible, the program achieved Sony’s “Three Rs” in a way seemingly more realistic than reality.

While the show was streamed in collaboration with the company’s music business segment, technologies fostered in the electronics division made the state-of-the-art imaging program possible.

Sony is also bringing its electronics technology to the recurring-fee business in cooperation with other segments.

In the U.S., it has a virtual studio where computers generate each scene in which actors perform so that assembling actual movie sets becomes unnecessary.

Sony established a similar studio in its video production unit, Sony PCL, in Tokyo in August for use by video makers and the marketing divisions of big companies in return for fees.

The service is a “unique approach made possible by Sony having both (electronics) technology and video production capacity,” said Shigeki Ishizuka, president and CEO of Sony Electronics, which was created in April to integrate the group’s home electronics operations to make them more competitive.

In October, Sony will merge its consumer and corporate display businesses, ending the current practice of producing and marketing TVs for consumers and projectors and big monitor screens for corporate users.

Sony has expanded its share of the TV market but failed to do so in the much bigger corporate sector. The integration of the two divisions will make it possible to develop new products by sharing image-processing engines as well as to use each other’s marketing outlets.

The developments come as Sony’s stock price has been on the rise, resulting in its market capitalization becoming the fourth biggest in Japan after Toyota Motor, SoftBank Group and sensor company Keyence, based on closing prices on Aug. 28. But the price surge is due to demand for its video games and other products as more people stay home during the pandemic.

Next April, the company will give its vaunted name of Sony Corp. to Sony Electronics when it renames itself Sony Group, crowning the electronics holding company as its proper successor.

“The electronics business is still the core of our technology and brand,” Ishizuka said.